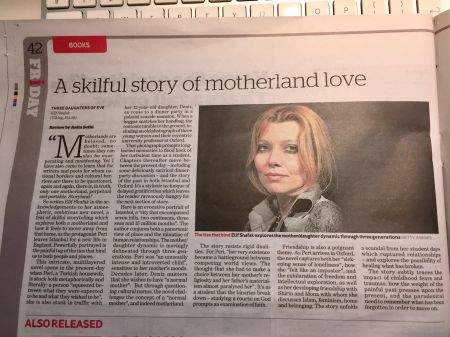 “Motherlands are beloved, no doubt; sometimes they can also be exasperating and maddening. Yet I have also come to learn that for writers and poets for whom national borders and cultural barriers are there to be questioned, again and again, there is, in truth, only one motherland, perpetual and portable. Storyland”.  So writes Elif Shafak – author of novels including Honour and The Forty Rules of Love – in the acknowledgements to her atmospheric, ambitious new novel which is a feat of skilful storytelling exploring both a motherland and how it feels to move away from one’s motherland as the protagonist Peri leaves her hometown of Istanbul for a new life in England. Powerfully portrayed is the painful tug of the ties that bind us to both people and places.

The intricate, multilayered novel opens in the present-day when Peri, a Turkish housewife is stuck both metaphorically and literally: a person “squeezed between what they were expected to be and what they wished to be”, she is also stuck in the Istanbul traffic with her 12 year old daughter, en route to a dinner party in a palatial seaside mansion. When a beggar snatches her handbag and she struggles to get it back, the contents tumble to the ground including an old photograph of three young women and their university professor at Oxford. That photograph – like the Proustian madeleine – prompts long buried memories to flood back of her turbulent time as a student. Chapters thereafter move between the present-day – including some deliciously satirical dinner party discussion – and the story of the past in both Istanbul and Oxford. It’s a stylistic technique of delayed gratification which succeeds in leaving the reader at times ravenously hungry for the next section of story.

Here is a hugely evocative portrait of Istanbul, a “city that encompassed seven hills, two continents, three seas and fifteen million mouths”. Violence ruptures lives, but brutality is brilliantly juxtaposed with moments of affection, such as a mother gently moving a lock of her daughter’s hair behind her ear (“The gesture, simple and affectionate, set off a rush of tenderness inside Peri”).

The author conjures both a panoramic view of place and the minute particularities of human relationships. The mother/daughter dynamic is movingly delineated through three generations. Peri was “an unusually intense and introverted child”, sensitive her mother’s mercurial moods ( “Depression was a word unheard of in the house. Headaches, she would explain”). Decades later, her twelve year old daughter Deniz mutters that she wishes to have “a normal mother”.  But through questioning cultural norms, the novel challenges the concept of a “normal mother”, and indeed motherland.

The story resists rigid dualities, exploring the space between.  For Peri, “her very existence became a battleground between competing world views. The thought that she had to make a choice, once and for all, between her mother’s defiant religiosity and her father’s defiant materialism almost paralysed her”. It’s as a student that the binaries break down – studying a course on God led by an eccentric professor prompts a fascinating examination of faith. Friendship is also a poignant theme. Piri arrives in Oxford in the year 2000 and the novel compellingly captures both her “sickening sense of loneliness”, how she “felt like an imposter”, as well as the exhilaration of freedom and intellectual exploration, and her developing friendship with Shirin and Mona with whom she discusses Islam, feminism, home and belonging. The story unfolds a scandal from her student days which ruptured relationships – and explores the possibility of healing what has been broken.

“You were not allowed to bring meat or dairy products into England from outside European countries, but no one said you couldn’t bring along your childhood fears and traumas” –  the story subtly traces the impact of characters’ childhood fears and traumas, how the weight of the painful past presses upon the present, and the paradoxical need to remember what has been forgotten in order to move on.